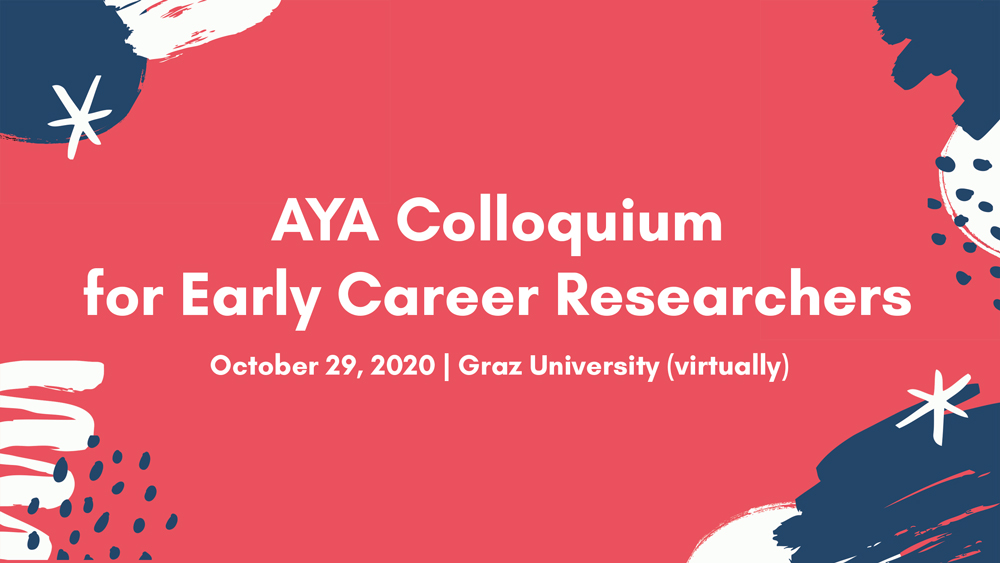 Hosted by Austria’s Young Americanists (AYA)
at the American Studies Department of the University of Graz, Austria, October 29th, 2020

Austria’s Young Americanists (AYA) cordially invited early career scholars in the field of American Studies to participate in our colloquium preliminary to the 47th annual AAAS conference. This event took place all-day on Thursday October 29, 2020. During the colloquium, five early career researchers were able to introduce and discuss their research projects as well as individual chapters from their dissertations with each other in an informal and relaxed atmosphere. The goal of this event was to provide early career scholars the opportunity to share their work-in-progress, receive feedback regarding their research, and build valuable networks with other scholars in their field.

The topics pertained to the main AAAS conference entitled “American Studies as Vulnerability Studies?,” dealing with the concept of ‘vulnerability’ as being both a shared condition of oppression and as emerging resistance and solidarity.  Participants were asked to submit proposals that deal with the following questions: which themes, theories, and disciplinary directions in American studies can productively engage with questions of vulnerability, and to what extent does current critical work against racism, misogyny, homophobia, transphobia, and ableism cohere around a shared sense of vulnerability? What are the prevalent idioms of vulnerability in American Studies, and how have they shaped critical practices in areas such as Affect Theory, Queer Theory, Transnational Feminism, Critical Race Theory, Trans Studies, among others? How can we theorize vulnerability within the context of the United States’ own history of internal and international colonization? How is vulnerability culturally produced and what are the ethics of mediating vulnerability?

Contributions were shared in advance among all participants, who were asked to read them prior to the forum. On the date, the participants briefly presented their projects (10-15 mins) to allow for enough time for feedback and discussion.

We use cookies on our website to give you the most relevant experience by remembering your preferences and repeat visits. By clicking “Accept,” you consent to the use of ALL the cookies.
COOKIE SETTINGSACCEPT
Manage consent

This website uses cookies to improve your experience while you navigate through the website. Out of these, the cookies that are categorized as necessary are stored on your browser as they are essential for the working of basic functionalities of the website. We also use third-party cookies that help us analyze and understand how you use this website. These cookies will be stored in your browser only with your consent. You also have the option to opt-out of these cookies. But opting out of some of these cookies may affect your browsing experience.
Necessary Always Enabled
Necessary cookies are absolutely essential for the website to function properly. This category only includes cookies that ensures basic functionalities and security features of the website. These cookies do not store any personal information.
Non-necessary
Any cookies that may not be particularly necessary for the website to function and is used specifically to collect user personal data via analytics, ads, other embedded contents are termed as non-necessary cookies. It is mandatory to procure user consent prior to running these cookies on your website.
SAVE & ACCEPT